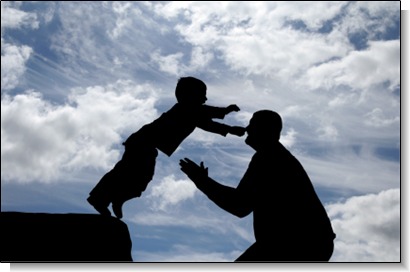 The ones who created a child, and then had to say goodbye.

The Dads who heard that they were a Father, and who were excited, nervous, in love…

…and then panicked, bargained, and whose hearts were broken.

The ones who helped to clean up the blood, who called 911, or who packed away the maternity clothes after their child was miscarried.

Who held their wife, whose arms were empty.

Who listened to people joke about when he was going to have a child, and who choked his pain back because they didn’t know–he already does have a child.

The ones who instead of buying diapers, bought burial clothes for their stillborn babe.

Or maybe the ones who bought a casket for their child instead of a car seat.

Or maybe the ones who never even got to look into their child’s closed eyes.

The ones who knew their child, and now can’t remember their voice.

Who play memories in their heads because they want something to hold on to.

Who wake up at night to care for their son or daughter, but who are only met by an empty bed.

The ones who have done this more than once. Silently, or aloud.

Who society doesn’t recognize how much fathering they’ve already done,

Even though he knows the names of each little one lost.

Who celebrate birthdays for children on Earth and in Heaven.

Who always see a gap in family photos.

Who learned that he doesn’t love the children he can touch any more than the ones of his that he can’t.

Whose tears forever sealed them as fathers.

Whose babies are waiting for them.

And whose hearts are spoken for.

In honor of all the Papas I know who had to say “goodbye” to their little ones too soon, and some who were never able to say “hello.” My own Father has eight living daughters, but also a few babies lost due to miscarriage, and his son–my only brother–was born still. My dad bought my brother a firetruck to put in his casket instead of a blanket to take him home in, and never had the chance to look into his son’s eyes.

As a paramedic, I have stood by women multiple times, being the one to deliver their stillborn babies or to attend them during a miscarriage. It is an experience that impacts you forever, and that you never forget. Today, I want the Forgotten Fathers to not be forgotten, but to be recognized and honored as the amazing men they are. There is nothing harder than not being able to save your own child. I am now a certified Birth and Beravement Doula, and counsel women with my Therapeutic Recreation degree, doing what I can to hold space and support families experiencing a loss.

Finally, we hold fast to the knowledge that eternal life is promised to all who believe and confess Jesus as their savior, who turn from their sin, and who strive to live a life that is holy and pleasing to God. We believe that all children go to Heaven and are held in the arms of our loving Abba Father who says He will wipe every tear from their eye. We know that we still have memories and relationships in Heaven, and so we look forward to when these “lost” children are reunited with their parents and can run into their Daddy’s arms one day.

There is always hope.

To download a free list of resources for pregnancy, infant, and child loss, join our Blessed Mama Sisterhood group which focuses on holistic mothering at http://tinyurl.com/holisticmamas.

One thought on “Here’s to the Forgotten Dads”