When I think of my childhood, I think of my seven sisters and the hours we spent playing “Freeze Tag”, forming “spy” clubs and kickball “clubs”. I remember magical forts built in the woods, paths mowed through the field, and lots of make-believe playing indoors. One thing I don’t remember are Barbies…because we never had them! And you know what? I never felt that I missed out.

Fast forward to today: I have a three-year-old daughter, and somehow, her firefighter-paramedic-drummer mother gave birth to a girl who has to play “ballet class” every day, wants to wear pretty clothes and paint her nails all of the time, and who would have every princess-related Disney item possible if I allowed it! I didn’t encourage this behavior, but I have allowed her to move in the direction she naturally chooses when it comes to “tom-boy” or “girlie” related things by having both available and being excited with her as she experiences and learns new things, regardless of which end of the spectrum they belong.

I thought I was doing, ok, right? I mean, she’s three-years-old…I don’t have to worry about this stuff too much yet, right? Maybe, maybe not. Meet: The Real-Life Ukrainian Barbie Doll. This 21-year-old from the Ukraine is reported to have transformed herself into a real life Barbie Doll, and according to the video linked above from ABC, she isn’t the only female to have done this. WHAT?! I daresay that I don’t need to explain or speculate any further than to say that I’m shocked by this, and I would be horrified at my parenting if my daughter ever was so critical of her image that she went so far to transform herself, and to a non-human image, on top of that! 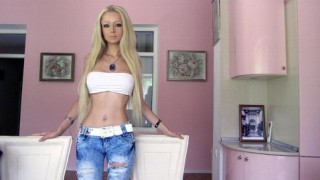 Where did this parenting go wrong, or is there an underlying mental illness that was triggered somewhere along the way? I think that we can clearly say that this woman played with Barbies as a girl, but with as many adults who had Barbies as children and are now normal, functioning adults with a healthy self esteem, can we really link the over-sexualized self conscious behaviors common to today’s young women to just Barbies?

My daughter doesn’t have Barbies, and I had never planned for her to have them simply because of the unrealistic over sexualized toys that they are. What about Disney princesses, though, who also often are found to have unrealistically small waists, larger than life breasts, and who always need a man to make their “happily ever after” to come true? Where is the line to be drawn?

Do you allow Barbies and princesses into your home, and did you play with them growing up?

2 thoughts on “Should we allow our daughters to play with Barbies?”