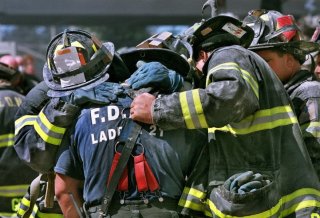 I wanted to be in NYC yesterday, on 9/11. It’s been ten years, and I can still vividly remember being outside hanging laundry on the clothesline when my sister came out and told me that an explosion or something happened in on of the Twin Towers. My mom and most of my seven sisters and I sat around the radio and listened as the events rolled out and it was determined that a plane actually crashed into the building. Once the word “terrorist” was thrown out as a possibility, we got the TV out of the attic and set it up in the living room. School work didn’t happen that day. Chores didn’t happen that day. And the things I remember most? The moment when we watched live as the second plane approached the second tower. The people who jumped out of windows–alive as we watched them plummet through the air toward the ground…and we knew what was going to happen both times. And we couldn’t stop it or look away.

Afterward, I watched as men from our town’s fire department went down to the city to help. I later listened to the stories, saw the somber faces, and I continued to wait until the day when I was legally old enough to join the fire department myself. As long as I can remember, I wanted to be a firefighter.

Here we are now, a decade later. I had planned to be in NYC for the 9/11 ceremonies until I found out that first responders were not allowed to attend. So I changed my plans to a local 9/11 services at my church…until another paramedic had to leave his shift at our ambulance company because he was volunteering for disaster relief due to all of the devastating flooding that is occurring in my part of our country. I signed up for his shift, feeling a little grouchy because I thought I would just be sitting on my butt all day doing nothing at an International racetrack near us.

The day before on 9/10, I had missed the funeral procession of a local soldier killed in duty in Afghanistan because I was working. Again, I would be missing something important to me that signified remembering and honoring those lost and those who stand for life and freedom. I wondered if anyone at the racetrack would hold some sort of service or do anything to commemorate the day, and I was quite relieved when I was notified that in half an hour, there would be a service for the first responders. I got up to eat my lunch so that my partner and I could attend, and had just finished when our radio went off.

Someone had crashed their car–not even during a race. It was during a non-event that no one would ever suspect anyone to get hurt in. Not only was this patient hurt, but it was severe. Waiting for a helicopter to come and fly our unconscious patient to a trauma center, I spent the next 45 minutes stabilizing  him along with another paramedic, a doctor, two nurses, and three EMT’s. Instead of attending any service, we gave life back to a stranger.

While I was cleaning blood off of things, throwing out used equipment, and documenting the events, I thought to myself how disappointed I was that I hadn’t been able to attend any service or even watch one on TV throughout the day. Then I realized–what better way to honor those killed in the terrorist attacks, the standing survivors, and those who are still fighting for life and freedom by their occupations or volunteer work in the US, or their service in the military overseas? Nothing could be more honoring to them than to continue the work, to continue to serve, and to continue to be there when someone needs you.

These words, taken from Fire Wife Katie and her Firefighter/Paramedic husband’s blogs, sum it up well:

Potent feelings were awoken that day ten years ago. People who never voiced an opinion suddenly felt compelled to set things right. Our desire to stand up and say something was stirred.

I think the 9/11 generation will be remembered as the generation that cared. Deeply.

To my brothers and sisters that have gone on before me, I will carry on. To the public, when you need us, we will be there.

And we will be here, always ready to give and protect life.

To the 343 NYC firefighters, 15 EMT’s, and 60 police officers killed that day, as well as the 2,000 first responders who were injured in the 9/11 attacks: you will never be forgotten, and your brothers and sisters will carry on.