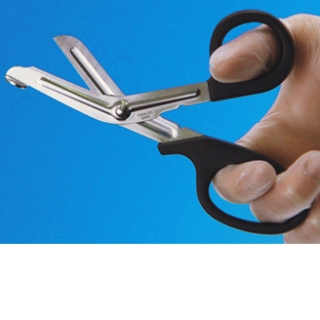 The snow has been furious the last two nights as I drove home. What normally takes me 35 minutes took me exactly one hour on Tuesday night (with my two babies strapped into the back seat) and what seemed like an endless amount of time on Wednesday night as well. For some reason, the plow and salt trucks didn’t see a need to be out to clear the road that was covered with snow over a layer of ice which resulted in me driving 20 mph all.the.way.home. Nice. Yesterday, the problem was not the road condition, but the visibility factor. Huge, beautiful, and memorizing snow flakes came at my windshield like a computer screen saver for the whole drive. Not only did you have to fight the hypnotic state it created, but you really couldn’t see anything including the lines on the road. Great.

All of this did make me realize one thing, though: there is no better motivation to drive extra-extra carefully than to know who will be cutting your clothes off if you crash.

The drive home of a paramedic goes something like this…

First, I double check my kids’ car seats to make sure they’re secured properly and that the thermal blanket is within arm’s reach if I need it. As I begin my drive, I am extra cautious as I approach the classic crash sites, and I think about the medic that just took my place when my shift ended 30 minutes ago. I warned his partner before I left that they are under no circumstances to cut all of my clothes off in the event my car flips over, and he promised to abide by that. After all, good bras are ridiculously expensive and by no means do I need my coworkers seeing me unclothed either. Seriously.

As I navigate the road, I’m proud that I made it through the curve that my own car crashed on 7 or so years ago. In my mind, I prepare a list of who is home and would respond with the fire department whose district I’m in right now. I think to myself that I would tell the 911 dispatcher to let the fire and ambulance know who wrecked her car so that I’d be sure to have the people show up who I know would do a good job and take care of my kids. As I pass out of my “favorite” department’s district though, I enter the next one.

There is no way I’m crashing here, and I slow down to 15 mph even though I could probably go 25. Why? Because I know one of the whackers in this department. Not only would he probably drive too fast for the conditions and slide his own truck into the side of my small car potentially killing my children, but he would have his scissors out before he could unbuckle his seat belt. I taste a little vomit in my mouth at the thought of this…maybe I’ll go 10 mph.

The county line arrives now, and my stomach drops as I realize I’m now entering not only the worst part of my travel (including losing cell service), but I have also now changed ambulance districts. I also think about how I’m passing the home of a registered child rapist and that if I crashed in front of his house, he may come out to my car to see what’s going on. No, thank you. I continue to drive as safe as is humanly possible, and I think to myself that the “Big & Rich” CD I’m listening to for the third time now is really great music to get you through a horrendous snow storm that no one in their right mind should be out during. Then it hits me: last time I had to be cut out of my car, this CD was playing…I immediately eject the CD and throw it on the passenger’s seat.

Into the next district now. Only two more districts to go, and my ambulance partner is one of the chiefs in the one I’m in now (yes, I think in terms of “districts” rather than “miles”). I vow to call him after I get off the phone with 911 if the unspeakable happens. I know he’ll run the show right.

Finally, finally, I arrive home and in one piece. I feel so successful that I want to broadcast my status on Facebook as “one more day goes by where my clothes stay intact.”

Like I said, there is no better motivation to drive carefully then to know the people who will be cutting your clothes off. Join your local fire department.

One thought on “A Paramedic’s Drive Home”