Skip to content
Guest blog article by Leslie for International Babylost Mama Day, which is being honored at Life More Simply all week long.
My name is Leslie and this is the story of my angel baby. 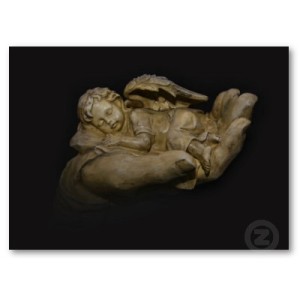 In June of 2008 we found out we were expecting our third baby. Although it was an unplanned pregnancy, we were thrilled at expanding our little family. I called the doctor that very day to set up my first appointment for 8 weeks. My first two pregnancies had been relatively normal so I wasn’t incredibly nervous for this pregnancy. When I was 6 weeks pregnant I woke up to some cramping. I tried to take it easy and rest, but that was difficult with my other two young children. At around 11 o-clock that morning I felt a sudden gush and the cramps intensified. I went to the restroom and discovered I was bleeding heavily. I tried to keep myself calm as I called the doctor and was told to come to the office immediately. I made arrangements for my other children and called my husband at work. He drove me to the doctor’s office where I had blood tests and an ultrasound.

During the ultrasound the doctor found the small gestational sac. I had never had an ultrasound this early in the pregnancy so I wasn’t sure what I was supposed to see. The doctor pointed out that the sac was a very abnormal shape and underdeveloped even for 6 weeks and that I was definitely miscarrying. I was sent home with instructions to come back in three days for more blood work to be sure my hormone levels were returning to normal. That was it. I went home, heartbroken, and held my then 9-month-old son and cried for several hours.

The following day I woke up with terrible morning sickness. I was very emotional and cried for several hours a day for the next couple of days. I was confused, though, as my morning sickness was increasing each day. On the third day I returned for more blood work and that evening my doctor called to tell me that my hormone levels were doubling still which meant I was still pregnant. She was baffled because of the abnormal sac from the ultrasound. We reviewed the ultrasounds and discovered that the abnormal sac was only 1 of 2 embryos that were growing. I had lost the twin. I was overjoyed that my pregnancy would continue, but I was still devastated that the other baby was gone. I went through many ups and downs over the next 33 weeks. I spent 10 long weeks on bed rest trying to hold on to the remaining baby.

The most difficult part of the loss was that it was pushed aside as if it hadn’t happened. I ended up with one healthy baby in the end of all of it so nobody considered this a loss. I received comments such as “at least you still have a baby, it could be worse” or “that doesn’t really count as a miscarriage because you still have a baby.” It was painful as I grieved completely alone. I felt that I couldn’t show any emotion about the loss of my baby or even discuss any pain I felt because maybe it really didn’t “count” as a loss. Every baby that is lost instills a level of grief that only a babylost mama can understand. Maybe the baby that I now hold in my arms was a cushion to the grief that I felt, but she does not replace her sibling in my heart. My grief does not overpower my joy, but the joy cannot completely mask the grief either.