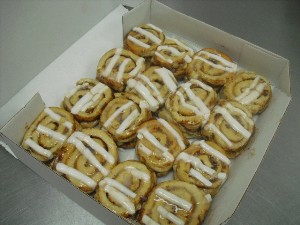 Holey Donuts is a small company that makes and sells–you guessed it–donuts! That’s not all though. They also make a variety of cinnamon buns and donut holes. The neat thing about this company is that all of their products are low fat, taste awesome (I can attest to the cinnamon buns!), and don’t include ANY artificial sweeteners or trans-fats.

At first, they seemed to good to be true. In fact, I was a little skeptical until I received a box of frozen pastries in the mail yesterday. Once I actually tried their Jumbo Low Fat Cinnamon Buns, I was hooked. Unfortunately for me, I have been gone to work during the day and my husband has been left back at home…eating the cinnamon buns! I’ll be doing a full review and giveaway for Holey Donuts in early January, but wanted to give you a head’s up on a fantastic give away that they’re going right now:

To Enter: send an email to info@holeydonuts.net. You will need to write “Life More Simply Blog” in the subject line in order to enter. Please only enter once. Holey Donuts will be randomly choosing a winner from all of the entries received.

Here’s another sweet piece of the deal: comment here and let me know that you entered…and I’ll give you an extra entry into the giveaway I’ll be doing in January! Come on, who wouldn’t like to eat home made cinnamon buns and donuts without the guilt or extra calories?

10 thoughts on “Win a Holiday Prize Pack from Holey Donuts!”