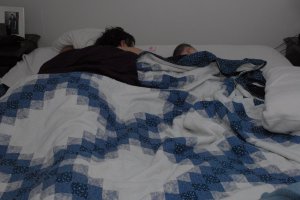 (and that little space on the right is where I sleep)
Did you miss Part One of this article? Check it out here: http://lifemoresimply.blogspot.com/2009/05/family-bed-part-one.html
When bed sharing (co-sleeping) with your child, it’s important to use common sense guidelines along with those listed in The Family Bed – Part One. Things like pulling long hair back, not allowing your scent to be hidden by wearing cologne or too much hairspray, and not allowing blankets to cover your child’s head. Contrary to popular belief influenced by the media, statistics and research show that bed sharing is actually the safest option for your child if done correctly.

We find that the benefits of co-sleeping or bed sharing compared to babies who sleep alone include:

· More regular heart rhythms and breathing patterns (Field, 1995).
· Four times less crying during the night and virtually no startling during sleep (Nelson, et al., 2001).
· Four times less likely to die from SIDS (both for bed sharing and infants who sleep next to their parents’ bed) overall (Blair, Fleming, Bensley, et al., 1999). This may be because these infants tend to spend less time sleeping on their bellies (McKenna, et al., 1994), or because the carbon dioxide that the parents exhale stimulates the baby’s breathing (McKenna has published research stating that babies tend to sleep with their faces very close to the mother’s face during sleep).

There are even long term benefits of bed sharing vs. sleeping alone, including:

Personally, I find that co-sleeping provides a better sleeping experience for all of us without the anxiety of sleeping alone. I don’t have to wonder if my daughter’s warm, crying, hungry, or breathing. In fact, she will give feeding cues while she’s still sleeping instead of waking up and screaming. It makes for a much more peaceful night to say the least! I save a lot of time and energy by co-sleeping as well, since I don’t have to get out of bed to feed my daughter. I just pull her over to me, feed her, and I either pull her back up to my head when she’s done or we fall asleep just like we are (with no blankets above her armpits, of course)! The only downside I’ve found is that she still wakes up every three hours to eat at the ripe old age of six months. I’ve read that it’s very common for co-sleeping babies to wake up more often during the night and eat more often during the night. This may be attributed to the fact that when sleeping together, people tend to adapt the same sleep cycle habits. On the one hand, the waking up is annoying, but on the other hand, I don’t mind because we still get a better night’s sleep overall and if she’s waking up, I know for sure that she’s still breathing.

A lot of information? Yes. Worth the knowing, though? Without question! Now…what are your thoughts on the matter?

5 thoughts on “Co-Sleeping and The Family Bed – Part Two”